As Amazon flirts with a mindblowing $1 trillion valuation, the world’s largest online retailer continues to throw the business rulebook out the window and dominate new markets. In the final quarter of 2020, the company’s profits more than doubled to $7.2 billion and sales climbed by 44% to a whopping $126 billion.

The tech giant is the brainchild of Jeff Bezos — an American entrepreneur with a grand vision to build the “everything store". After its humble beginnings as an online book store in 1994, Amazon has branched in all directions to become a jack of all trades and a master of (almost) everything.

As you would expect, companies of this size are bound to come under scrutiny. Many critics fear the tech giant has unfair control over its markets — making Amazon an unstoppable force with no ceiling.

So, is Amazon’s business model sustainable and what are regulators doing to curb Bezos’ hunger for market domination?

Join us as we investigate the Amazon business model under the microscope. We’ll review potential problems with Amazon and discuss why and how regulators are encouraging fair competition among smaller online retailers.

What Does Amazon Do?

While most people think of Amazon as everyone’s favourite place to grab a bargain, the tech giant is a much more complex and multifaceted machine than meets the eye. Once we peel back its many layers, a carefully-planned chain of events over 25 years have led to Amazon’s incredible success.

Ever since the early days in Bezos’ Seattle garage, Amazon has always been about waiting for the right time to release innovative customer-oriented products. Bezos ignored what everyone else was doing, and instead, focused on the power of Big Data to create hyper-personalised products for his customers.

“Don’t worry about competitors because they’re never going to send us any money. Let’s be worried about our customers and stay heads-down focused.” -Jeff Bezos

The best way to understand Amazon and how it came to be is to rewind to 1994.

The fresh-faced Princeton University graduate identified books as an established market in need of a fresh lick of paint. There were only two major US book distributors at the time — none of which had committed to online retail.

Bezos rallied a crack team of data scientists to understand who their customers were and why they behaved as they did. While most online booksellers struggled to manage inventories, Amazon’s superior data analytics meant they could predict what their customers wanted, sometimes before the customer knew themselves!

Former Head of Amazon Services, James Thomson explains how the tech giant can “anticipate which brands customers are going to need in three to six months when they’re ready to ‘unexpectedly’ buy those products.”

The cornerstone to Amazon’s success is its fascination with clickstreams. These are the digital breadcrumb trails left by users as they navigate through a website. Even in the very early days, data scientists analysed clickstreams to paint an accurate image of each customer and tailor individual experiences to build a personalised shopping universe.

One of the company’s first recruits, David Selinger, explains that “every mouse click and every twist and turn through the website was itself a commodity.”

Amazon’s obsession with using data to drive the customer experience was the secret ingredient to Amazon’s recipe for success. Once they could leverage customer data to add value to customer experiences, Amazon was well on its way to becoming a commercial behemoth.

More recently, Amazon is tinkering with the concept of ‘zero-click shopping’ where customers can enjoy a seamless shopping experience, without lifting a finger. The data giant plans to launch an opt-in service where customers receive automatic deliveries of household essentials by running a series of predictive experiments using Amazon’s vast repository of customer obsession data.

What Is Amazon’s Business Model?

While Amazon initially rose to fame as an online retailer, today’s $1 Trillion valuation is thanks to its diverse but interconnected portfolio of business ventures and revenue streams.

Instead of building enormous inventories to stock every product under the sun, Amazon developed an outsourced e-retail solution to maximise growth. Back in 2001, the bright-eyed retailer joined forces with its biggest competitors by convincing them to sell their products on Amazon’s website.

Big names included Target, Marks & Spencer and even Waterstones — all of whom were new to e-commerce and wanted to make a quick buck from the new kids on the block.

Little did they know, Amazon was using these sales to collect tonnes of valuable data and build sophisticated customer profiles. While the other retailers benefited from increased sales in the short-term, they were shooting themselves in the foot by handing over intellectual property to their biggest competitor.

Author of ‘Think Like Amazon’ , John Rossman, explains that these companies were “giving away the keys to a kingdom.”

The second string to Amazon’s e-retailer bow involves listing products from smaller third-party retailers. In 2020, Amazon generated over $80 billion from third-party sellers, up from $53.76 billion in the previous year.

Amazon leverages its established distribution network and customer base to provide a service called ‘Fulfillment by Amazon .’ Small retailers can start selling in the press of a button by outsourcing tasks to Amazon. 58% of all physical products sold on Amazon are from smaller third-party retailers.

The engine that powers its “everything store” is an algorithm called A9, which ranks products based on their purchase likelihood. Therefore companies that list products on the platform must understand how to optimise for purchase likelihood by choosing the right keywords and images and sales copy.

Adjacent to Amazon’s online marketplace is the world’s fastest-growing delivery and distribution network. In 2020, Amazon delivered approximately 5 billion packages — a herculean feat given that UPS delivered 5.5 billion in the previous year after 120 years in operation.

Since the company’s humble beginnings as an online book store, it’s distribution network grew from 7 dedicated facilities in 1999 to over 1,500 in 2021. With most of Amazon’s 500,000 new recruits hired in 2020 filling logistics positions, the company’s rapid rise to the top of the delivery market shows no signs of slowing down.

Some of Amazon’s biggest competitors are reliant on Amazon’s servers to keep their entire operation afloat. Whether it’s watching your favourite shows on Netflix, buying online groceries with Sainsbury’s or downloading games from the App Store, AWS is the secret weapon behind it all.

AWS even runs the servers for the CIA!

Not only do their data centres handle a third of the outsourced computing infrastructure around the globe, but it’s also the source of two-thirds of the company’s profits, raking in a massive $13.5 billion in 2020 alone.

Amazon has ventured into the world of TV, music and even groceries to fulfil Bezos’ vision of becoming the ‘everything store.’ The tech giant is building a subscription-based empire to add value to people’s lives in every possible direction.

The likes of Netflix, Spotify and online grocery retailers all centre around the idea of creating tailor-made services to enhance customer experiences. Amazon’s ability to understand customer preferences puts it in a prime position to dominate the service sector.

Much of Amazon’s success in its early days was a credit to Bezos’ laser-focus on reducing delivery times to earn customer loyalty. Fast-forward to 2021 and Amazon Prime has more than 50% of US adults signed-up at an annual cost of over $100.

Amazon Prime connects customers with an entire network of services to cement their loyalty with the Amazon ecosystem. In the future, there are even talks of Prime membership covering health care as Amazon enters the pharmaceutical market with the recent acquisition of PillPack .

4. The Internet of Things (IoT)

Unless you’ve been hiding under a rock, you’ll have heard of a lady called Alexa living in homes across the world. Products likeAmazon Echo Dot and Amazon Ring serve to blur the line between online and offline by entwining the internet with our everyday lives.

Whether it’s asking your virtual assistant to set a reminder or leaving a voice note for your delivery driver, the Internet of Things opens doors to more customer data and fuels growing dependency on the Amazon ecosystem.

Besides futuristic glasses and mind-reading virtual assistants, Amazon also has plans to combine their data expertise and obsession with customer experiences to change the way people get from A to B. Following the growing popularity of ride-hailing apps like Uber, Amazon believes they have what it takes to become the class favourite with their $1.2 billion acquisition of autonomous car developer, Zoox. 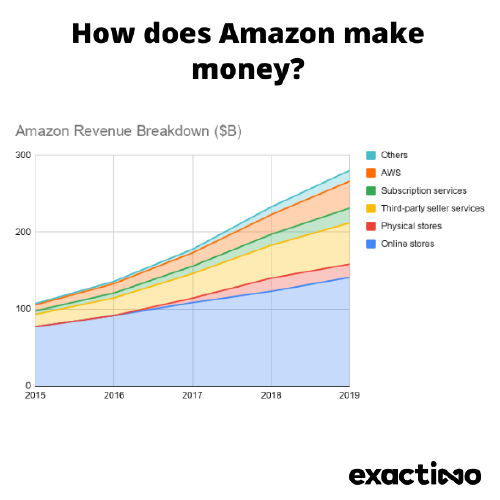 Why is Amazon being regulated?

One of the biggest challenges faced by Amazon is overcoming government regulations on the technology industry. Just as Facebook and Google have come under fire from anti-monopoly laws and data protection scandals, Amazon is feeling the heat. Remarkably, the tech giant spent over $18 billion on federal public relations in 2020 and has accumulated a team of 118 Washington lobbyists — more than the total number of US senators!

The cornerstone to almost any issue about regulating big tech is data. As Amazon continues to build accurate user-profiles and understand people’s most intimate desires, what steps are they taking to protect the privacy of their customers?

So, is Amazon’s business model sustainable and why are regulators concerned about their growing dominance?

Let’s take a look as some of the most hotly-debated Amazon regulatory issues:

At Exactimo, we’re passionate about helping people get digital fast. Our digital bootcamp gets business students up to speed in 90 minutes.

If you want to build your confidence and master essential skills to help you walk into your next job interview feeling prepared, we’re here for you.

Experts with first-hand experience at companies like Google and Amazon will teach you the ropes. People that know what it takes to stand out from the crowd and get yourself noticed.

Exactimo provides an insider’s perspective that busts myths and reveals exclusive tips to give students a competitive edge. Our interactive bootcamp has been honed over years of practice to provide the highest possible career impact in the shortest available time.

During the workshop, we’ll provide you with an armoury of sit-up statements or ‘nuggets of gold’ that will impress interviewers when it really matters.

Our ‘sit up statements’ are designed to immediately signal interest and mastery of a given topic. Our pearls of wisdom have helped many attendees land big tech jobs at Google, Facebook, Amazon or at emerging startups.

Want Us to Deliver at Your Business School?

Don’t get left behind — get digital fast.

If you’d like to get your hands on our exclusive training, fill in your details below and we’ll get back to you within 24 hours to arrange a bootcamp.

We use cookies to help us understand how to improve your experience on this site. Please see our Privacy Policy for more information. Please respond to this message, or continue to use the site to accept.