What was once a pipe-dream in a college dorm, is now the largest social media platform on the planet — dominating the screens of over 22% of the world’s population and generating over $70 billion in revenues a year in the process.

The phenomenal growth of Zuckerberg’s billion-dollar empire has revolutionised the way people communicate and provided a treasure chest of opportunities for modern businesses.

Join us as we explore the bricks and mortar behind Facebook’s unique business model and address the heated debate around the internet giant and its ethical responsibilities to regulate its social influence.

Before we get into the nitty-gritty of Facebook’s business model, it’s important to understand the company’s origins and the core motivations behind Zuckerberg’s thirst for global domination.

After establishing himself as an accomplished coder at school and turning down job offers from both AOL and Microsoft, the history of Facebook begins with Zuckerberg landing a place at Harvard University in 2002.

While you’d expect the fresh-faced undergraduate to enrol in a computer science degree and follow in the footsteps of almost all Big Tech CEOs, Zuckerberg majored in Psychology.

From the word go, he was fascinated by the human psyche, mapping social behaviours and using technology to create addictive user experiences. In his second year at Harvard, Zuckerberg launched his first attempt at a social network — Facemash .

Facemash was a controversial platform where fellow students could rate the attractiveness of their Harvard peers. After receiving over 22,000 photo views in just hours of launching, Zuckerberg’s dreams of becoming the next big thing were crushed when the site was shut down a few days later.

Struggling to motivate yourself with job or university applications? Check out this video of 15-year-old Zuckerberg finding out he’s been accepted into Harvard.

Unperturbed by his first failure, Thefacebook was launched in February 2004. Initially, access to the rudimentary social network was limited to users with a Harvard email address — 50% of whom signed up in the first month of the launch. A few months on, Thefacebook took off like wildfire and universities across North America were itching to create an account.

By June 2004, Zuckerberg set up shop in California where he could get his hands on his first round of investment. As the social network continued to thrive, Zuckerberg decided to open membership to the masses in September 2006. After dropping the ‘The’, Facebook became an international sensation and grew in sophistication.

As Facebook continued to attract new sign-ups, Zuckerberg added fuel to the fire by acquiring other technology businesses in the social networking space.

Instead of targeting smaller businesses that could merge with Facebook’s existing platform, the tech giant scaled vertically by buying its competitors. The acquisition of Instagram for $1 billion in 2012 and Whatsapp for $19 billion in 2014 was the beginning of Facebook’s growing social media empire.

Zuckerberg wants to have a finger in every pie. Acquiring a range of different social networking platforms means Facebook has the versatility to cater to a range of audiences and benefit from economies of scope to accelerate technical developments.

Together, these five dimensions give Facebook the scope to dominate the social networking sector and engage with billions of users across a multitude of applications.

The way that Facebook makes money is through advertising. In fact, 98.5% of its revenue comes from advertising.

While the likes of Google, Amazon and Apple found their fortune through multiple channels and creating captive ecosystems to win customer loyalty, Facebook’s business model has taken a very different approach.

Zuckerberg’s social media obsession is fuelled by the ability to monetise human attention spans and create a virtuous cycle of user-generated content . Instead of selling products or services directly to customers, Facebook uses social media to provide engaging and addictive services that grab the world’s attention.

Essentially, Facebook is a giant marketing machine. Much like babies cry to summon their mothers, the social media giant uses a cocktail of photos, posts, likes, videos and messages to win more screen time.

So, how does Facebook make money from data? Facebook’s attention-based business model is fuelled by a four-step process:

Active users provide Facebook with a smorgasbord of personal information. Whether it’s tracking your location or using facial recognition to map your close circle of friends, Facebook can monitor your behaviour through millions of data points.

User data serves as the fuel for the Facebook algorithm which processes each snippet of information into meaningful insights. Facebook combines these insights to paint a detailed picture fo your life.

Facebook uses these insights to sell businesses hyper-targeted ads. While traditional advertising would narrow its audience by placing a billboard in a particular part of town or showing TV commercials at a strategic time of night, Facebook allows businesses to target specific customers with incredible precision.

For example, let’s say you’re promoting a female-only salsa class for people aged 55+ living within a 5km radius of the town hall. Facebook ads mean you can double-down on these specific criteria and maximise the efficiency of your marketing campaign.

Ads serve as the bread and butter of the Facebook machine. Paid posts fill users’ timelines with relevant content that is tailored to their individual preferences and behaviours. Users then interact with these posts by sharing, liking and commenting.

Social media timelines provide users with endless entertainment through an infinite scroll on engaging content. Many platforms use tactics from the gambling industry to create an addictive user experience that keeps us glued to our screens.

This engagement fuels yet more activity and provides Facebook with a virtuous cycle of data that feeds back into its algorithm. 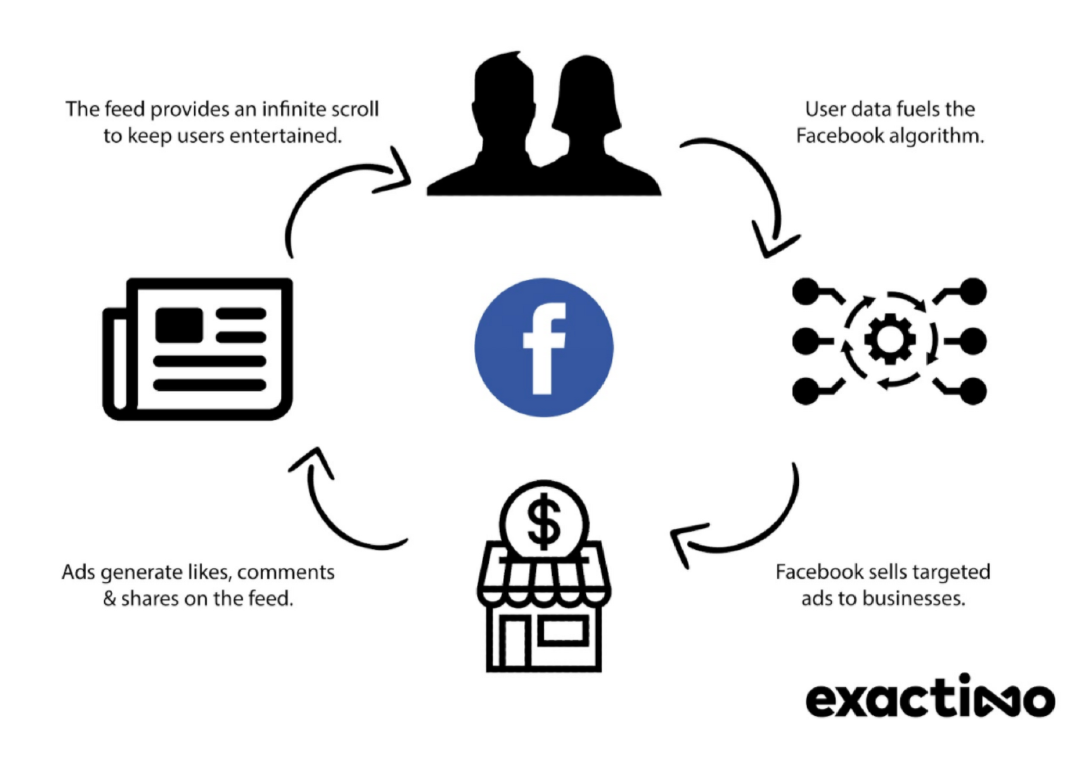 Unless you’ve been living under a rock for the past few years, you’ll be no stranger to Facebook’s ongoing battle with data harvesting and regulatory issues.

With the core premise of Facebook’s business model revolving around data and collecting personal information for financial gain, Facebook was bound to raise some eyebrows. The company’s aggressive and off-the-wall approach is something governments and regulators struggle to contain using the existing rulebook.

Despite Facebook’s efforts to embrace data privacy through full end-to-end encryption on Whatsapp and transparency measures via the Off-Facebook-activity tool , the multi-billion dollar giant faces its fair share of criticism from Big Tech regulators.

Zuckerberg’s rapid rise to fame has triggered wide-spread panic and apprehension as people try to make sense of what Facebook is trying to do, why this could be damaging for society, and how regulators can control the growth of social networks in a responsible and sustainable manner.

“When you give everyone a voice and give people power, the system usually ends up in a really good place. So, what we view our role as, is giving people that power.” - Mark Zuckerberg

While the techie maverick sounds like his heart’s in the right place, many regulators are concerned that Facebook could grow into a toxic machine that could spread fake news, distort public opinions, and monopolise an entire industry.

There are three focal points in the ongoing debate around regulating Facebook:

One of the biggest concerns for regulators is knowing how to control and monitor the spread of fake news across social media. For years, Facebook has tried to dodge this bullet by defining itself as a tech platform, not a publisher or media company.

This definition gives Facebook the freedom to facilitate the sharing of information, without adhering to strict publication laws and media privacy standards.

Following a tidal wave of fake news in recent years, many regulators pin the blame on Facebook for circulating irresponsible and misinformed content.

As Big Data helps tech firms build sophisticated customer profiles and curate what we see online, many regulators are concerned about the manipulation of personal information for illicit activities.

Zuckerberg’s biggest roadblock to date was the 2018 Cambridge Analytica scandal . The tech giant was accused of allowing Cambridge Analytica to harvest the data of millions of Facebook profiles without user consent and then using it for political advertising in the 2016 US Presidential Election.

When the scandal was announced on 17th March 2018, Facebook’s market capitalisation sank by $119 billion in a matter of days and Zuckerberg was forced to testify in front of the United States Congress.

The acquisition of competitor social networks, such as Instagram and Whatsapp, raise questions over how regulators can control the growth of Big tech firms like Facebook.

Many fear of Facebook stunting opportunities for smaller startups to grow and disincentivising innovation. Facebook has a track record of buying the best ideas before they have time to fully blossom as a stand-alone company.

As the social media empire begins its latest venture into cryptocurrency with the launch of Libra , concerns around unfair power and monopolistic control will be a hot topic in years to come.

At Exactimo, we’re passionate about helping people get digital fast. Our digital bootcamp gets business students up to speed in 90 minutes.

If you want to build your confidence and master essential skills to help you walk into your next job interview feeling prepared, we’re here for you.

Experts with first-hand experience at companies like Google and Amazon will teach you the ropes. People that know what it takes to stand out from the crowd and get yourself noticed.

Exactimo provides an insider’s perspective that busts myths and reveals exclusive tips to give students a competitive edge. Our interactive bootcamp has been honed over years of practice to provide the highest possible career impact in the shortest available time.

What are Sit-Up Statements?

During the workshop, we’ll provide you with an armoury of sit-up statements or ‘nuggets of gold’ that will impress interviewers when it really matters.

Our ‘sit up statements’ are designed to immediately signal interest and mastery of a given topic. Our pearls of wisdom have helped many attendees land big tech jobs at Google, Facebook, Amazon or at emerging startups.

Want Us to Deliver at Your Business School?

Don’t get left behind — get digital fast.

If you’d like to get your hands on our exclusive training, fill in your details below and we’ll get back to you within 24 hours to arrange a bootcamp.

We use cookies to help us understand how to improve your experience on this site. Please see our Privacy Policy for more information. Please respond to this message, or continue to use the site to accept.